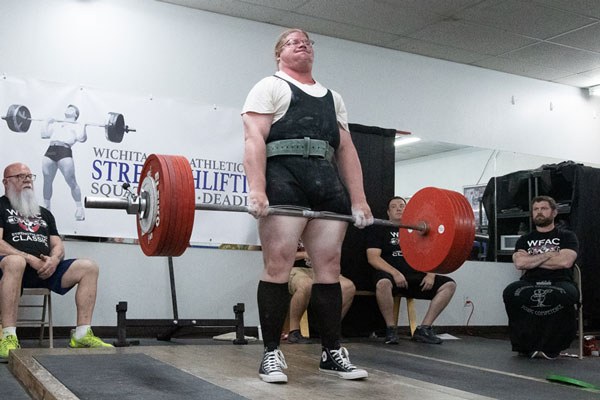 Strength is the ability to produce force against an external resistance. Absolute strength is the amount of force that you’re able to exert, or simply how much weight you can lift, regardless of your bodyweight. The more weight you’re able to lift, the stronger you are – it’s as simple and clear as that. Lifter B deadlifts more than lifter A, ergo, lifter B is stronger.

If you have been active on social media recently, you would have come across Icelandic strongman, Hafþór Björnsson, breaking the strongman deadlift world record by deadlifting 501 kg. Look through the video’s comments section (not the best of ideas) and you’ll find the comment, “Yea, but he weighs 205 kg. 501 kg is only like 2.44x his bodyweight. Lamar Gant deadlifted 310 kg while weighing in at 60 kg – that’s over 5x his bodyweight, so he’s stronger. I deadlift 250 kg at a bodyweight of 100 kg, for reps! That’s 2.5x my bodyweight, more than Hafþór.”

First, both Hafþór and Lamar are freakishly strong, there’s not a shred of doubt about their strength. However, to state that Lamar is stronger than Hafþór is inaccurate for the simple fact that Hafþór deadlifted almost 200 kg more.

If you answered lifter A to the question asked at the beginning of this article, you’re thinking of relative strength – a person’s strength in relation to his or her bodyweight. Relative strength is commonly used to compare lifters of different bodyweights or used to gauge “strength standards” – arbitrary bodyweight multipliers to assess one’s strength. A frequently used standard for a “good baseline of strength” would be a 1x bodyweight overhead press, 1.5x bodyweight bench press, 2x bodyweight squat and a 2.5x bodyweight deadlift. On the surface, using this metric seems like a simple and easy way for lifters across a range of bodyweights to see where they stand. However, things aren’t quite so straightforward.

Let’s take a 50 kg lifter deadlifting 150 kg and a 100 kg lifter deadlifting 300 kg – both pretty damn decent deadlifts. They’re both lifting 3x their bodyweight and would seem to have similar relative strength. While it appears that they are on par with each other, it’s a bigger challenge for the heavier and larger lifter to achieve the 3x bodyweight lift than it is for the lighter lifter. The challenge increases as the lifter’s bodyweight increases. Have a look at the world records taken from the International Powerlifting Federation’s (IPF) website and you’ll notice a trend. If you’d like to take a closer look at the raw data, see the charts at the end of this article. 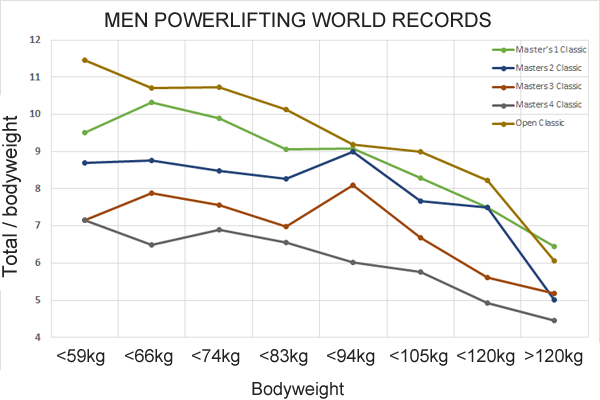 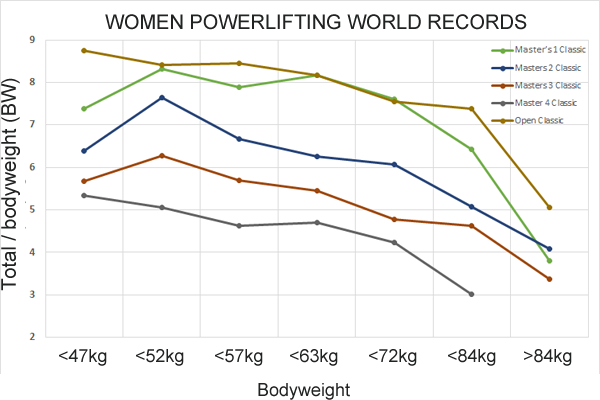 The lifter’s bodyweight and the multiple of their bodyweight that they’re able to lift are inversely proportional – as the lifter’s bodyweight increases, the multiple of their bodyweight that they’re able to lift decreases. Additionally, as the lifter gets older, their absolute and relative strength both decline, which is unsurprising. However, even with consistent decline in strength as the lifter gets older, I observed something interesting: in every single category (apart from the woman’s Masters 4), there was a slight uptick in relative strength in the lighter weight classes (U66 and U74 weight class for men and U52 and U57 weight class for women) before generally decreasing across the board. Could these bodyweights be the “optimum” weight range for the maximum relative strength? Could being “too light” not be optimal for maximum relative strength (U59 for men and U47 for women)? Perhaps, but It’s tough to draw conclusion from such a small sample size. (My efforts to increase the sample size proved futile as I couldn’t find records from other federations which fulfilled similar competition standards as the IPF and included the lifter’s bodyweight in their records.)

Another variable would be height – how tall are these lifters? A lifter standing at 1.6m tall and weighing 66kgs would have way more muscle mass than another lifter weighing the same at 1.8m tall. Men, in general, are taller, which could explain why there’s a slight uptick in the men’s U93 weight class for the Masters 1, 2 and 3 categories. If you’re a taller lifter, restricting your bodyweight would suppress your potential – in this situation, you’d want to bump up your weight class(es) to maximize your strength capabilities.

Now that we can see the inverse relationship between an increase in bodyweight and relative strength, let’s talk about why this phenomenon occurs.

Relative strength does not increase linearly with an increase in size because of isometric scaling – when proportional relationships are preserved as size changes. Apart from our heads (which are proportionally larger when we are young), our proportions stay pretty much the same as we grow. Even if we go up a weight class, no body part lengthens – you don’t see someone’s arm, leg or trunk get longer as they gain weight. Isometric scaling is governed by the square-cube law – a principle that describes the relationship between volume and surface area as the shape’s size increases or decreases. When an object undergoes a proportional increase in size, its new surface area is proportional to the square of the multiplier and its new volume is proportional to the cube of the multiplier. 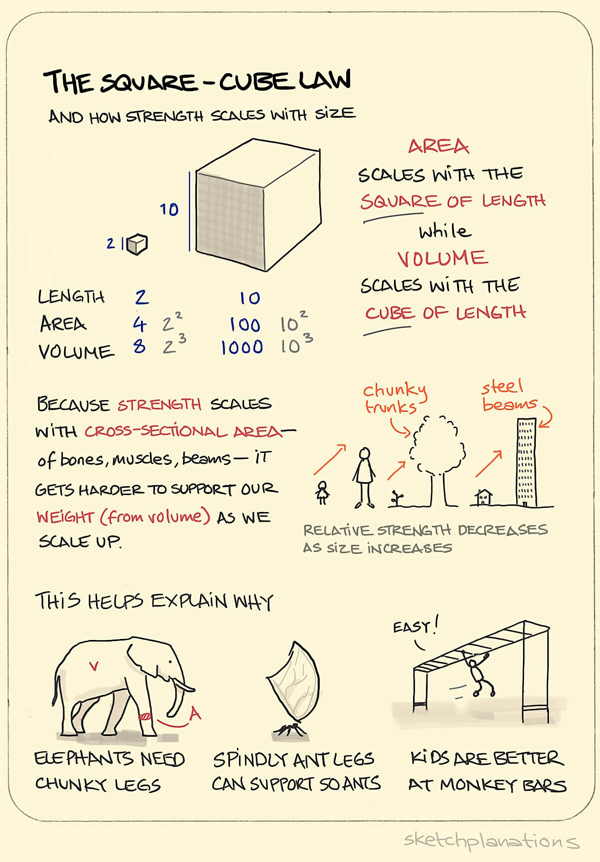 The increase in mass doesn’t take into account body composition – when you go from 50 kg to 100 kg, your ratio between muscle/fat may or may not be linear. The 50 kg you with 15% bodyfat will carry more muscle mass proportionally than the 100 kg you with 25% bodyfat. While you’re carrying more muscle mass at 100 kg, its proportion in relation to the rest of your body composition is less than when you were 50 kg, which further decreases your relative strength.

When you put on muscle mass, you don’t increase the number of muscle fibers. Instead, your existing fiber’s cross-sectional area gets bigger. The increase in muscle cross-sectional area not only leads to gains in strength but also an increase in the muscle’s pennation angle (the angle between the longitudinal axis of the entire muscle and its fibers) and insertion angle (the angle between the muscle insertion and the bone on which it inserts). The increase of both angles as the size of the muscle belly grows improves the muscle’s mechanical advantage and increases its ability to produce force around a joint by more than the square of the size multiplier.

While we can definitely observe a trend whereby relative strength decreases as bodyweight increases, there are factors that affect its linear relationship. Having standards to gauge your progress and to compare yourself with others is human nature. Everyone does it, and you probably routinely hear comparisons being made in the gym with the most popular comparison question of all being, “How much do you bench, bro?” I hope this article has given you some insight on the drawbacks of using bodyweight multipliers.

A variety of formulas attempt to solve the issue of normalizing lifters of varying bodyweights so that they can compare their performance with each other. but there has not been one that isn’t biased for or against certain weight classes. Till someone comes up with a formula to do so, go ahead and use whatever metric you want, but be aware of its limitations.

Powerlifting world records taken from the IPF website on 16 May 2020.