The Barbell, The Teacher (Part 3) – Committing to Consistency and Excellence 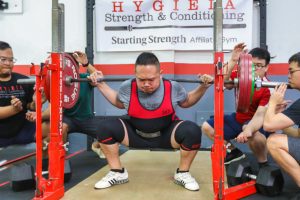 While barbells are the best way to get strong, improved physical capabilities aren’t the only benefit.

In Part 1 and Part 2, we saw how Patience and Hard Work can positively influence your life, by encouraging you to forgo short term gratification for long term benefit, and training up your ability to stick with doing hard things.

Now in Part 3, we’ll look at the lesson of Practice and how it helps you get better in just about anything you want to do.

Practice is the understanding that commitment is necessary for excellence.

If you want to get good at any specific thing, you need to put in the time and effort to practice it – there are no two ways around it. This applies to all skills, such as learning a language or a musical instrument. It also applies to habits you might want to develop, like being mindful of your finances or eating habits.

The thing is, developing new skills or habits require change. But change is difficult, because most people are reluctant to step out of their comfort zone. Change happens incrementally, with consistent effort over a period of time. Most people do it for a short while, get impatient and quit too early. Then they get frustrated as to why they’re unable to achieve anything meaningful.

Committing to the path of improvement

In barbell training, commitment means consistently training the basic lifts that give you the most bang for your buck – the squat, press, deadlift and bench press, with the intention of getting better over time. Getting better means being able to lift more weight while still maintaining technical proficiency in the lift.

To the casual observer, a squat might appear to be a very simple movement. You put the bar across your back, squat down and stand back up. Newbies often think, “How hard can it be? Looks pretty easy!”

Actually, the squat is a lot more complicated than it appears to be – there’s much more to it than meets the eye. Don’t believe me? Try it yourself. Experienced lifters make it look easy, but their ability to make it look effortless is the culmination of years of practising the movement.

The key to practice is consistency. The first few times you squat, it’s very likely that it won’t be great. And for quite some time after, your performance might still be erratic — sometimes your form is pretty good, sometimes it’s not. While practising the movement is important, another aspect that’s equally as important is getting feedback. Without any feedback, you’re probably not even aware of the mistakes that you’re doing. Repeatedly doing the same mistakes over and over again without correction is a good way to ingrain bad habits – that’s when a coach comes in handy. Practise the movement consistently over time, with feedback guiding you towards what you should do, and you’ll be well on your way towards a better and stronger squat.

Does the weight on the bar matter? If your goal is to get stronger, then yes. Strength is the ability to exert force against an external resistance. Therefore, if you want to get stronger, you need to lift more weight, which means more weight on the bar. To be able to lift the most amount of weight possible, maximise your lifting efficiency by utilising the most amount of muscle mass and the biggest muscles to move the load – to be able to do that requires one to know have an understanding of lifting techniques and consistent practice to get it right.

In a way, barbell lifting is like dancing. It’s an art, and takes a trained eye to discern the difference between just going through the movement, and making it a thing of beauty.

In dance, every part of the body contributes. Every part needs to perform its role and move in a certain way at a certain time to result in that effortless harmony of the whole. Barbells are no different. Where the bar is placed, how the bar moves in space, how your body moves and the sequence of its movement, how you stay focussed with something heavy pressing down on you while dealing with all the many things going on…. True mastery of this simple movement is the seamless dance of many parts.

This is why most beginners look clumsy, but experts make it look effortless, easy and beautiful.

Experts only become experts through committed, regular practice. Because practising gives you a deep understanding of the process, it leads to the gradual improvements that are necessary for true proficiency.

Regular practice is a virtuous cycle of progress

What happens when practice becomes an ingrained habit?

After you’ve put in sufficient hours under the bar, you can tell when the rep is good or bad. You instinctively know when your weight has shifted forward a bit too much or if the barbell has drifted away from you.

This is important feedback, because when you’re aware of what’s going on, you’ll know what’s wrong with the current rep. Instead of mindless repetition, you can now know what’s wrong, assess and fix it immediately.

This can only happen if you have sufficient practice in developing your proprioception (the awareness of how your body moves in space) and your understanding of lifting technique (the most optimal way of performing the movement).

Once you’ve had sufficient practise, these things will come naturally. Your training keeps getting better, because you’ve set up a virtuous cycle of progress, where awareness leads to immediate feedback that you use to improve your next rep.

The satisfaction of long-term practice

What does the path of progress look like for the average lifter?

In the long term, practice itself can be immensely satisfying. Yes, there’s the obvious satisfaction when the rep feels smooth and awesome and you know that you nailed that rep perfectly.

But there’s also the deeper satisfaction of commitment, of loving practice for its own sake. Training itself becomes pleasurable, regardless of how it went that day. You’re not easily discouraged by a temporary bad outcome, because you know what went wrong, and you know how to fix it when you come back the next time. You’ll feel in control, taking ownership of your own progress.

Practice empowers and inspires you

Taking this commitment to practice and applying it to other endeavours has the power to change many aspects of your life.

In any skill that you’re trying to learn, put in the hours of purposeful practice and you’ll definitely see yourself progressing.

But that’s not all. Because you’ve trained up your ability to practice, you’ll naturally strive for excellence. You’re more likely to achieve your goals, because you’re used to commitment, and you understand your own ability and willingness to put in the time and effort required to do something well. You’re not afraid of challenges, because you’re confident — you know you have the mental tools to deal with it, and that you’ll get there over time.

While we can’t guarantee that “practice makes perfect”, it certainly makes progress quite inevitable.

In Part 4, we’ll look at the fourth and final lesson: Focus — the ability to concentrate on what’s important and to ignore what isn’t.