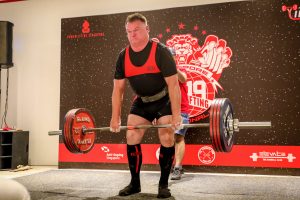 A hungry boy was eating a bag of cherries. The very last one slipped out of his fingers, and dropped on the floor. His quick reflexes told him to pick it up – FAST! After reclaiming his cherry, he shouted, “FIVE-SECOND RULE!”

“If it’s not five-second yet, it’s still okay to eat!” the boy thought to himself. He cleaned the cherry using his T-shirt and gave it a quick blow. “Good as new,” and proceeded to eat the cherry he just picked off the floor.

The hungry boy grew up and became a strength coach. When he saw his lifters failing their lifts, he thought to himself,  “Surely, if they want it as much as I wanted my cherries, they could have pulled it up.” And thus, the FIVE-SECOND RULE in lifting was born.

Which team are you in?

Have you heard of the five-second rule? Have you noticed yourself or seen anyone giving up on their lifts, although it looked relatively easy until they gave up?

If you are guilty of such a crime, don’t worry! You are not alone! The majority of the lifters belongs to Team “Let it go!”

Bro science tells us that there are only two kinds of lifters in this world – lifters that are strong and lifters who let it (the bar) go.

I can understand. Up until now, everything has been smooth sailing for you.

You know the bar can go up… Up until now!

You start to doubt yourself,

You are exhausted. Thoughts start coming into your mind.

That’s when Elsa comes into your brain, singing

Check this video out. Observe his third rep and tell me what you think. Is he in Team Lift Heavy, or is he in Team Let It Go?

Honestly, I didn’t expect him to fail his third rep. And see how fast he decided to stop pulling. Elsa hasn’t even started singing!

You are strong enough, but…

You need to give yourself some time to recruit the maximum number of motor units in your muscle. A more in-depth discussion about motor unit recruitment would require you to read another 1,000-word essay, so let me summarize in just a few sentences:

1. Each muscle consists of a few motor units that are recruited according to the load we are handling.

2. A smaller load requiring less force would require a lower number of motor units being recruited.

3. A bigger load requires more motor units to be recruited, and this requires time. Imagine that when you’re surfing the internet using 3G, you will need to wait longer for the things to load if you want to watch a 4K video on YouTube.

1. Don’t let go of your bar for a full five seconds!

Yes, it will feel like the hardest thing you’ve done in your life. It will feel impossible until it becomes possible. So, the key is to want it enough.

Be the hungry boy!