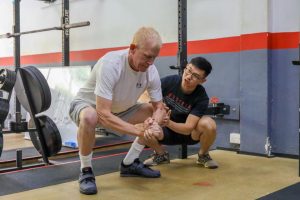 Recently, I had a conversation with a guy at a commercial gym; we talked about barbell training. He heard about Starting Strength (SS) before, and as he knew that I coach people with the SS Method, he asked, “Why do you teach people to squat like a stripper?” 😂

If someone has some slight exposure to the SS Method, the catchiest thing is that we squat with “HIP DRIVE.”

Hip Drive’s function facilitates a squat with an optimum moment arm distribution between the hip and the knees while maintaining a midfoot balance. And since the hip extensors are the strongest muscle group we have, we want to initiate the movement of the bottom by forcing our hip to extend. This way, we can transfer the force effectively from the floor to the bar.

Unfortunately, after watching this video, a lot of people think that the hips need to shoot up much more until the back angle becomes close to horizontal. As this happens, a lot of knee extension (straightening of the knees) happens at the start of the ascend. So if you can freeze the movement at that particular time, you will see that the knees are wide open (typically more than 90 degrees), while the hip angle remains acute (less than 90 degrees).

In the end, you will do a lot of work straightening your torso back to vertical at the top. Similar to the “Good mornings.” Coincidentally, lifters who frequent strip clubs remember this clearly as the “Stripper Squat.”

Our squat isn’t that sexy.

Sorry to disappoint you; that’s not the ideal squat that we do in SS. Although there’s a slight emphasis on “Hip drive” at the beginning of the motion, the back angle remains generally stationary during the first half of the ascend. So if the hip goes up by 10 cm, your bar will also go up approximately 10 cm.

What’s the issue with the Stripper Squat?

Well, if you are doing the movement in the gym (and not anywhere else), you’d most likely have the bar on your back. When the hip shoots up excessively and your torso becomes more horizontal, the chances are that your bar will start to roll up to your neck, causing you to fall forward. If the bar goes way forward of your midfoot and you’re not able to overcome the force pulling you forward, you will fall headfirst. Ouch!

Final Destination aside, if that doesn’t happen, the minimum consequence is that the force you exert from your knees and hips is not transferred to the bar. Again, I’m playing this video in slow motion. Notice that the hips went up a lot at the beginning of the ascent, but the bar doesn’t really go up much.

If you have this issue, there are few sources on how to “fix” your Stripper Squat. Some will give a few cues to work on. However, I want to convey 2 important points:

Let’s clear it once and for all, when you are driving your hip back, the goal is not to drive your glutes as much as you can. Doing so will create an unnecessary moment arm and thus shift your balance from the middle of your feet.

Will it shift the balance forward to the toes or back to the heels? It depends. If the weight is light compared to your body weight, you will most likely feel the weight on your heels. The heavier it is, the more likely it will roll forward to your toes. So, since neither is good, make sure that balance stays at the centre of your feet. The pressure should be equal on the toes and the heels.

Human vertebrae consist of 33 individual bones that interlock with each other with facet joints. These joints allow some degree of bending and rotation. Under a load of the barbell, we shall not let the whole segment be flex. If it flexes, it doesn’t transfer force effectively. Thus no matter how much force you exert, the bar will not go up. We’ll use a book to illustrate back extension.

Well, that’s it for now! As a token of gratitude for reading this far, let me reward you with this video.