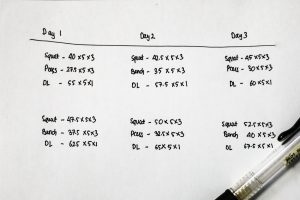 Over the past few years that I’ve been a strength coach, I’ve worked with dozens of lifters and brought most of them through to the end of their Novice Linear Progression. It is indeed a very satisfying experience to get someone through the process of getting stronger and witnessing firsthand the effects strength has on an individual. Every once in a while, I’d encounter clients who are novices and who are very keen to hasten their progress, insisting that the weights used are too light, feel too easy, or that they don’t feel like they’re working out or some other permutation of these comments.

This is when I’d explain to them the rationale of why it’s important to keep the weights manageable at the start. First off, we need to quantify what a novice lifter is. A novice is an individual who’s able to recover from the stress of lifting weights and make progress within 48 to 72 hours. It’s irrelevant whether the individual is a runner, a couch potato or someone who has been doing bro-bodybuilding split routines for the past five years. If the individual is placed on the Starting Strength Novice Linear Progression and is able to add weight to the bar every 48 to 72 hours, they’re considered to be a novice.

Now that we’ve gotten that out of the way, let’s discuss what happens when a client comes in for their first session. The first lift that they’re going to learn is – no surprises here – the squat. After going through the teaching method for the squat, we get them to perform their first set with the empty bar. Every subsequent set that they perform (if technique is sound), we’ll add a bit of weight to the bar. The amount of weight added will differ from person to person with consideration for the lifter’s age/gender/bodyweight etc. This process will continue till we find a weight that’s manageable, but slightly challenging, and that the lifter can lift while maintaining good form. We’ll call that their first working set of the day, and we’ll do two more sets with the same weight before moving on to the press before ending off with the deadlift. At their second session two days later, we’ll add some KGs to the working weight of their squat and perform three working sets before bringing them through the teaching method of the bench press and find their working weight. We’ll conclude the session by adding some KGs to their working weight of their deadlift. Two days later, at their third session, we’ll add more KGs to all their lifts. On these initial few sessions, the weight increases can be between 2.5 and 10kgs, depending on the lifter and the particular lift. For example, a larger male might be able to add 5 to 10kgs on his deadlift, whereas a smaller-sized female might add 5kgs to her bench press. After the first few sessions of making these increases in weight, we’ll drop down to 2.5kg increases per session, unless smaller increases are required.

During this period of 2.5kg increases, some lifters might start to feel impatient and insist that we make bigger weight increases because it still feels too easy and they don’t feel like they’re “working out”. Often, they’ll also insist that they’re ready to go for their next set 20 seconds after finishing the previous set. I believe this stems from the idea floating around in mainstream media that for exercise to be effective, one must “feel the burn”, be breathless, feel their heart bursting out of their chest and be absolutely knackered. This exercise mindset describes physical activity done for its own sake, for how one wants to feel while performing it. At our gym, we focus on training, not exercise. We must abandon the exercise mindset and take on the training mindset in order to make progress over the long term.

Training is following a systematic program, performing each workout towards a longer-term goal and disregarding how each session feels each day. For clients with the exercise mindset, I explain to them that the gradual 2.5kg increases in weight on the bar allow them to practice the movement and focus on the technique of the lift with a weight that’s manageable. As they repeatedly practice the movement with incrementally heavier weights, they’ll learn how to maintain good form when the barbell gets heavy. When coupled with teaching them about resting sufficiently between sets so that they can be recovered enough to complete the subsequent sets, and they’ll make good progress over the long term. Although a 2.5kg increase each workout might not seem like much, a 2.5kg increase three times a week for a month translates to a 30kg increase per month. Keep to the gradual weight increases and the bar will feel heavy before you know it.

Every single client that stayed on course and followed the program for two to three months realised the rationale of why we choose to do things this way. Now, several months into the program, they come into the gym slightly apprehensive of the weight that they’re programmed to lift that day. They ask for an extra minute or two of rest before their next set. The weights programmed to lift that day may be very challenging, but the lifter is complete their sets because they’ve built a strong foundation by learning how to stay tight and push against incrementally heavier weights every session while maintaining good technique and resting sufficiently between sets. If you’re an individual with an exercise mindset who’s currently on the Starting Strength Novice Linear Progression or considering giving it a go, I implore you to be patient. Follow the program and you shall be rewarded by being stronger than you’ve ever imagined at the end of it.