Why Some Lifters Pass Out After Deadlifts, and How to Avoid It 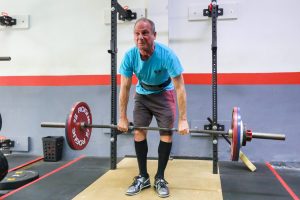 You’ve probably seen those viral videos: a lifter pulls a heavy deadlift and everything looks awesome. He puts the bar back down on the floor, stands back up, looks around like he’s confused, then suddenly, boom! He’s passed out flat on the floor.

Despite how widely shared those videos are, fainting after deadlifts is really quite rare and can be avoided if you know why it happens.

Passing out after deadlifts is actually quite rare

Over the past year, I’ve received such videos from concerned clients, family and friends. If you have no idea what I’m talking about, go to YouTube and search for “deadlift passing out”.

As a coach, I want to clear the air.

I’ve been coaching barbell strength training for more than a decade. I’ve coached lifters from age 10 to 79, from raw beginners touching barbells for the first time, to experienced lifters testing their 1 rep max. I’ve been to multiple meets, both locally and internationally, and I’ve organised a bunch of meets at my own gym.

And not once have I ever seen someone pass out. Can one pass out after deadlifting? Yes, it could happen but it’s really pretty damn rare.

Of course, if you watch a video that combines a bunch of clips of lifters passing out, and all your friends are sharing it, then it’ll seem like everyone is passing out after deadlifting.

Those videos are popular precisely because they are dramatic. But in reality, fainting while training isn’t as common as you might think.

“Vasovagal syncope”: the science behind fainting

In simplified terms, “syncope” is a temporary loss of consciousness, and “vasovagal” relates to a drop in blood pressure caused by overactivity of the vagus nerve.

Put together, “vasovagal syncope” is a non-life-threatening type of fainting spell, due to a temporary decline of blood flow to the brain.

Fainting during deadlifting probably occurs due to the Bezold-Jarisch reflex, which describes a state of shallow breathing or low respiratory rate, low blood pressure and low heart rate.

This may happen because when stressed, your cardiovascular system mounts a big increase in heart rate, contractility and systemic vascular resistance. The baroreceptors in the heart and arteries detect this sudden surge in vascular and cardiac wall pressure, and trigger a compensatory, parasympathetic overcorrection that decreases your heart rate and vasomotor tone. Your blood pressure falls and cerebral perfusion pressure drops below baseline…lights out.

In simpler terms, your blood pressure rises during a heavy deadlift. The system overcompensates, and just as you finish the lift, blood pressure suddenly falls. This can happen very quickly, and it’s this sudden drop in blood pressure that makes you feel like you’re going to faint.

What usually causes it: not breathing properly

So what happens to cause vasovagal syncope while deadlifting?

While I haven’t seen anyone or had a lifter pass out, I’ve noticed that those who feel lightheaded when deadlifting are usually newer or inexperienced lifters.

Because they’re unfamiliar with deadlifting, they take longer to set up – fussing around with whether the back is set properly, whether the weight is on the midfoot, etc. Also, they tend to do the rep much slower than necessary.

Either of these actions means that they are holding their breath for longer than they should. Holding your breath for too long can lead to lightheadedness.

Sometimes, lifters take too many breaths in rapid succession. This is called “hyperventilation”, where they inhale and exhale too quickly, resulting in narrowed blood vessels that reduce the blood supply to the brain. Taking too many breaths can also leads to feeling faint.

How to deadlift and breathe if you get lightheaded

Regardless, we found that a short, sharp exhalation at the lockout (top of the deadlift) helps to alleviate feeling lightheaded while deadlifting.

1. Inhale, set your back, and pull the bar up to the lockout

2. At the lockout, do a short, sharp exhalation – just a small breath out

3. Hold your remaining breath as you lower the bar down all the way

4. Only exhale fully after the bar has been set back onto the floor

Note that you don’t want to exhale a lot of air at the lockout – you still need to have air inside you, for support because you’ve still got a heavy bar in your hands. This is just a short exhalation, where you release only a small bit of air.

Help! I’m going to pass out!

What if it doesn’t help, and you can feel signs that you’re going to faint?

If you start to feel lightheaded/dizzy/unsteady or start seeing spots or having tunnel vision, then take a knee or get as low to the ground as possible. ASAP!

Vasovagal syncope itself isn’t the problem, since you’ll regain consciousness relatively quickly once your blood pressure normalises. The main problem is that you’re in a gym environment, surrounded by really hard, heavy and potentially sharp objects. It’s the falling onto shit on the way down that you need be really careful about.

Vasovagal syncope is uncommon, and if it does happen, it’s usually not serious. If you do experience lightheadedness while deadlifting, pay attention to your breathing and try sharp exhalation at the lockout fix we recommended earlier.

In most cases of vasovagal syncope, treatment by a medical professional is unnecessary. However, if you experience frequent episodes of passing out or feeling lightheaded while training, it might be a good idea to seek the advice of a medical professional to find out if there are any potential underlying health issues.

If you’re curious about syncope (fainting) and want more information about it, its various types, causes, diagnoses and treatments, here’s a medical lecture from Dr. Jonathan Sullivan, who was an emergency physician and a Starting Strength Coach. He talks about vasovagal syncope from 20:10-24:15.