Iron Plates vs Bumper Plates: Why Does Iron Feel Heavier Even With The Same Weight? 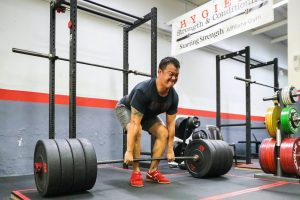 Since you’ve started training, you’ve always used bumper plates. Maybe those were the plates you started using when you first started lifting and you’ve stuck to it out of habit. But one day, all the bumper plates in the gym were used up. You looked around the gym and there were only black cast iron plates or calibrated powerlifting plates left. No biggie – weight is weight, right?

You double-check to make sure the weight is correctly loaded. Yup, it is. So you gave it another go. And it still feels heavier than usual. You don’t know why, so you put it down to not sleeping well the night before.

Later in the week, you’re back in the gym for squats. Again, you used the calibrated powerlifting plates. And again, they feel heavier than you remember it to be when you were using bumper plates. Out of curiosity, you weigh the plates… and the scale confirms that they’re accurate. Not convinced, you unload the calibrated plates and reload with bumper plates. You squat again. Ahhh! That feels familiar, and oddly, easier.

Why is it that the iron plates felt heavier?

Many variables affect how the bar feels to the lifter, and weight isn’t the only thing that matters. Actually, there’s some physics involved when it comes to plates and bars.

The effect of a force: Moment = force x distance

If you remember your secondary school physics, a moment causes a body to rotate about an axis and a moment arm is the distance from the point of rotation to a force applied at 90 degrees to said axis. The moment arm can also be described as the perpendicular distance from an axis to the line of action of a force.

The higher the amount of force applied or the longer the moment arm, the greater the moment. For bumper plates, there’s a greater moment around the axis of rotation, even though the force is similar, because of the longer moment arm caused by the bumpers being thicker. On the same bar sleeve (the end of the bar where you load the plates), they will be further away from the axis of rotation, which is the point whereby you interact with the bar (either your hands in a deadlift or your upper back in a squat).

The weight of loaded plates creates a moment. The moment may create a bend or deflection in the bar, depending on the magnitude of the weight and its distance from the weight to the point of the rotation and other factors like the geometry of the bar.

Here’s a simplified visualisation. The force F is the weight of the plates, the red rectangles are the plates, the triangle is the point of rotation is where you interact with the bar in a squat, and the perpendicular distance L is the length from where the bar sits on your upper back to the centre of the plates. 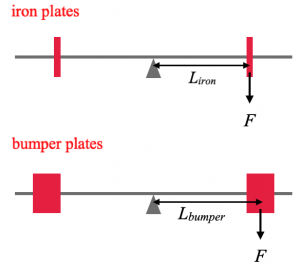 As you can see, Lbumper is longer than Liron, due to the thickness of the bumper plates.

Let’s insert them into our equation Moment = F x L. It’s clear that for the same force F, the moment arm will be greater for iron plates than bumpers, causing a greater turning effect.

But… the difference in distance doesn’t seem like much. It’s only a few extra centimetres. So why does the iron plates feel so much heavier?

Let’s look at how this extra distance affects the bend in the bar.

Here’s a diagram that shows bar deflection, δ (“delta”). In a simplified deadlift system, the equation for delta is:

F is force (due to weight),

L is the distance from your hands,

E is the elastic modulus of steel (a constant based on the properties of steel), and

I is the area moment of inertia (based on the geometry of the barbell).

The main point is that deflection is proportional to the cube of the length.

So if your bumper plates are further out by even just 5 or 10cm, the impact on deflection is actually cubed!

If you’re ever watched a lifter pulling a heavy deadlift, you’ll observe that the bar will deflect as it is being pulled. If you paid close attention, you’ll notice that not all of the plates will leave the ground at the same time.

Basically, because of deflection, not all the weight comes off the floor at the start of the deadlift. This puts you in a more mechanically advantageous position when all of the weights come off the floor.

Watch these videos of Lasha Talakhadze deadlifting 300kgs and Russel Orhii deadlifting 315kgs and observe how the bar deflects when each lifter starts to pull.

For squats, the weight can rebound up

Bar deflection creates the “whip” of a bar. This means that the bar is slightly elastic, and will rebound back from its deflection.

In the videos, you can see that there’s a bit of deflection at the bottom when the lifter changes from descending to ascending. That little bit of upward momentum of the bar caused by the bar “whipping” back up can help propel the bar up slightly.

This is used in Olympic weightlifting, when the lifter is propelling the bar into the jerk position.

Apart from the plates used, the geometry of the bar also matters. Remember the bar deflection equation above? I, or the area moment of inertia, is a property that predicts deflection based on the shape of the bar.

Bars are cylinders with radius r, so

Inserting this into the deflection equation, we get

Again, the main point is that deflection is inversely proportional to the 4th power of the radius of the bar.

So a tiny difference in radius can result in a significant deflection! (And in case you forgot, diameter is twice the radius; the inversely proportional relationship is the same.)

For powerlifting, the International Powerlifting Federation (IPF) rules state that the diameter of the barbell has to be between 28-29mm. However, the standard for manufacturers is 29mm.

While 1mm doesn’t seem like much, the relationship above shows that it does affect deflection. In some powerlifting federations, deadlift bars, which are 27mm and about 10cm longer than a 29mm bar is used for the deadlift. This longer, thinner bar will allow more deflection, exacerbating the issue of using bumper plates.

For more details on the science, check out this article on the materials science of the barbell.

What this means for you

Now that you know why it feels different, what do you do with this information?

I can think of 3 things:

1. Ideally, train for your sport. Whether you’re using bumpers or steel, train with what you’ll be competing with. This means bumpers for weightlifters, and calibrated steel plates for powerlifters.

2. If training for general strength, choose the harder option. If you have access to the equipment, I’d generally recommend iron plates because they take away your mechanical advantage. I used to train with bumper plates because I’m not very strong and thought it was cool to have the weight look heavier than it actually was – pretty sad, I know. But when I had to move to iron, it felt significantly harder, so I made it a point to only use iron plates.

Even if the meet you’re training for will be using a 27mm deadlift bar, stick to a 29mm bar for the bulk of your training and switch to a deadlift bar when approaching the meet to get accustomed to it. You’ll be pleased with how much easier it’ll be when you use the deadlift bar. It’s much easier to transition from harder to easier, rather than the other way round.

3. Be strong, not look strong. Deadlifting with a deadlift bar and bumper plates is not the same as using a 29mm bar with calibrated powerlifting plates. You might fool yourself into thinking that you’re stronger but at the end of the day, you aren’t fooling anyone but yourself.

If you’re training for strength, which I believe you are if you’re reading this, remember that the point is to be stronger, not look stronger.