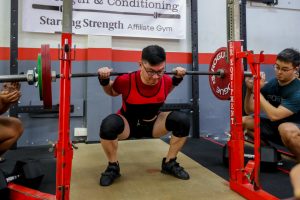 The timer goes off, it’s time to go for your PR. Palms are sweaty, knees weak, arms are heavy. You’re nervous, but on the surface you look calm and ready. The bar is loaded at a weight you’ve never done before. The last warm-up felt unusually heavy. Your mind unknowingly start to doubt yourself, “if the last warm-up already felt that heavy, can I really lift that weight on the bar”?

You start wearing your belt and walked onto the platform. Positioned yourself under the bar and took a big breath.

As you unrack the bar, you feel like your body is about to get crushed like a tin can. You take a step back to adjust your stance, but it’s hard to move your feet into the correct stance. You think to yourself,” this must be how it feels like squatting in a black hole.”

“There’s no way I can come up from this squat.” Right there and then, your fate is sealed.

Then you hear your coach yelling at you, “big breath and go!!”

You think, “okay, coach. Here goes nothing.” You start to descend, reluctant to go low and cut your depth an inch or two too early.

“Should I give up? Should I push?”

The bar dipped a little.

The bar probably went up a tiny bit, but not for long. You finally decided that it’s not going to happen, stopped pushing, set the bar down onto the safeties and got out from under the bar disappointed with your performance.

What happened here? Let’s analyse what could be done better in this scenario.

If today is an important day for you, especially if you plan to go for a PR, make sure you are well-rested and well-fed before the attempt.

However, some days are better than the others; you can sense it a little from the warm-up. If your warm-up doesn’t feel as good as usual, it’s not an immediate failure for you. Take smaller jumps for your warm-ups – do singles or doubles and rest a little longer between warm-up sets. Take some coffee, don’t rush it.

As you unrack the bar, you feel like your body is about to get crushed like a tin can

Well, this is normal. It will feel heavy because you have never attempted this weight before. Some lifters say that their head feels like it’ss about to blow up, or once they unrack the weight, they feel that their body gets 3-inches shorter.

This feeling doesn’t correlate with the outcome of the lift UNLESS you let it be.

Tl;dr – How it feels doesn’t matter.

You proceed down in your squat, reluctant to go low

Trust the process that you have gone through so far. It feels different because it’s a different weight. Obviously, it’s something outside your current territory, but you don’t need to do any different. Execute it as planned, do everything exactly like how you normally do it.

Same speed – going faster to get extra bounce will not work; going slower for additional control will not be productive.

Same depth – no matter how hard it will be, you’ll only torture yourself for an obvious waste of energy once you cut the depth. Squats not done to depth isn’t a squat and will not be counted.

Same cue in mind – if you usually think of midfoot as you squat, keep thinking about midfoot. If you always think about your eye gaze, concentrate on your eye gaze. If you don’t usually think about anything particular, keep it that way, don’t start reflecting on what you can do better during that rep. PR attempts are not a time to try something new.

“Should I give up? Should I push?”

Hesitation always comes at this moment. Yes or no? Push or let go?

You might think, “Oh no! I overshot my RPE” – push through anyway.

You might think, “Is this safe?” – push through anyway.

You might think, “Wow, my head is about to explode” – push through anyway.

You might think, “My coach sucks” – push through anyway.

I wrote an article before regarding the five-second rule. It’s about giving a chance for your body to recruit more and more muscle to contract and produce force.

Imagine that you are in the drag race; you want the car to move as fast as possible to win the race. If you are a Porsche 911 Turbo S, you will go from dead-stop to 100km/h within 2.7 seconds. Porsche 911 Turbo S is the top athlete in the world. Unfortunately, you are most likely a Toyota Corolla, and if you are a 2020 model, you will take 8.1 seconds to hit 100km/h.

So, yes, you can probably produce enough force to lift that heavy bar, but you need more time to unleash your maximum force. You might perceive that feeling as hard; you might perceive it as discomfort; no matter what you feel, accept that it’s part of the process.

Tl;dr – accept the uncomfortable feeling under the heavy bar.

This is what I do: I generally think about NOTHING. It’s almost like I’m meditating under the bar – trying to remove any active thought about anything other than just completing it. If I start thinking, the first thing that will pop up is how heavy it is, and I will start considering that maybe it’s too hard to do.

1. I am a robot – I am programmed to do, and I will keep doing it. This robot doesn’t know if it’s hard or easy. I find this trick more useful during high volume rep, for example, a super heavy set of five or a dreadful set of eight.

2. I leave my brain on the bench when I put on my belt – I’ll just be dumb and keep on pushing.

I know it sounds weird, but that’s my way of keeping focused and not being distracted by anything else.

However, the final key to SUCCESSFULLY complete/grind a difficult rep/set is to

ACCEPT THAT IT’LL SUCK LONGER THAN WHAT YOU WANT,

and before you know it, you have completed your rep.

Please watch until the third rep for your entertainment.