How Long Should I Rest Between Sets? Take The Time For Proper Recovery And Faster Progress 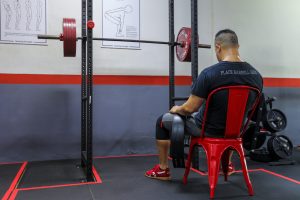 Does this sound familiar?

Coach: It’s only been a minute. Rest a little bit more.

Lifter: Nah, I don’t need that much rest. I feel ready, let’s go!

If you haven’t guessed by now, our lifter in question is most likely a novice. How much rest to take between sets is actually a very common conversation that we have with our novice clients. But the question of rest concerns all lifters, because rest between sets is a necessary but often overlooked part of training.

So how long should you rest between sets?

Not resting enough is a common rookie mistake

We once had a client who constantly ignored our recommendations and insisted on cutting short his rest. After each set, he’d take a seat. But less than a minute later, he’d walk over to the rack, take the bar out saying that he was good to go and started lifting. We told him to rest more, but he’d completely ignore us and continue lifting.

He was a newbie to barbell training, so it’s possible he didn’t understand why rest between sets is important. So we explained it. Over and over again. Despite everything, he wouldn’t listen and started the next set as soon as he felt ready. Because his weights started pretty light, the rationale for resting sufficiently between sets wasn’t apparent.

After a few weeks of training, the weights started to get slightly challenging. And the consequences of insufficient rest showed up pretty quickly. As usual he rested too little before taking the bar out. It was a 5 rep set, but on his 4th rep, he couldn’t get back up. He failed the set. It wasn’t that the weight was too heavy. He failed because he wasn’t fully recovered from the previous set but could have easily completed it if he rested for a couple of minutes more.

Did he learn? Well, not entirely. He’d take our advice, but would get impatient periodically and try to bargain for a shorter rest durations. And every now and then, he’d fail his set because he wasn’t fully recovered and we’d have the same conversation about resting between sets. I don’t know if he realised that he could have made better progress if not for this. These days, he’s more receptive to advice.

Exercise versus training: A high heart rate is NOT the goal

It’s a common misconception that exercise = cardiovascular exercise. The general population experiences this as breathlessness and an elevated heart rate. So if your heart is not beating out of your chest and you’re not gasping for air, are you even exercising?

Therein lies the rub. There’s a difference between exercise and training. Depending on your goals, there will be situations where you want a high respiration and heart rate.

If your respiration and heart rate goes up, it’s just a by-product of strength training, especially when the weights get heavy. But it’s not the goal.

The goal is to complete all your sets

Fatigue accumulates. If it takes a few minutes longer on your last few sets to recover, go ahead and take it. Rush your rest times and it’s likely that you won’t be able to complete all the sets and reps planned for your session – not good.

Remember, your goal is to lift the weight on the bar. So your priority is to do whatever it takes to increase your ability to produce force. Resting is not weakness. Resting for those extra minutes gives you time to fully recover so that your force-generating capabilities are not compromised.

Most people are pretty bad at estimating their rest times, especially when they first start training when the weights are light and they’re feeling good. In general, rest for a little longer than you think necessary.

Avoid taking short rests just because you want to keep your heart rate up and feel like you’ve exercised. It’s an excellent way to sabotage your workout and curtail your long-term progress.

But what if I don’t have enough time?

We hear you. Workouts can get pretty long, especially when you’re more advanced.

But if you’re already taking time out of your busy schedule to train, then you should make sure that this time is well-spent. You know the importance of strength training, and you’ve experienced its benefits for your quality of life and well-being. Don’t screw up your training progress by skipping necessary rest.

And yes, we know that you’ve got family, work and other commitments. You probably don’t have the luxury to spend hours in the gym. We understand that. However, cutting short on your rest time between sets is not optimal. Instead, learn how you can save time in the gym.

So, how long should I rest? It depends.

As with a lot of training questions, there are no definitive answers. Sorry, but there’s no template formula that you can plug directly into your training plan.

A general rule is to rest long enough to be ready to perform the next set, but not so long that you start to cool down too much.

Understanding this concept and translating it to actual rest periods requires some self-awareness and experience. Here are some guidelines that can help.

1. How advanced are you?

How far along are you in your training progression? Are you a novice, intermediate or advanced lifter? The more advanced you are and the heavier the weights are (for you), the longer you need to rest.

If you’re a novice just starting out, resting for 2 minutes or so will suffice. But as you progress and the weights get heavier, your rest times will start lengthening. To get a clearer picture, you can start tracking your rest times and identifying your optimal rest patterns.

Biology makes a difference. In general, female lifters don’t need as much rest. They can go for a hard set and recover faster than male lifters.

In general, females have a lower neuromuscular efficiency compared to males. This means they can’t recruit huge numbers of motor units into contraction in a very short time. In other words, a real heavy set of squats for a male and female are 2 different neuromuscular events. The female lifter will be further away from her limit, even though the weight may feel heavy. So because females are not as close (or can’t get as close) to recruiting almost all of their motor units (most authorities agree that a 100% motor unit recruitment is impossible), they don’t require as much as rest as males.

From our observations, male lifters near the end of their novice linear progression would probably need to rest for 7 to 10 minutes, whereas female lifters are ready to go after about 4 to 5 minutes.

Is there such a thing as resting too much? Yes, because rest has diminishing returns. After a certain point, your body starts to get “cold”. You’re no longer ready for the next set. Personally, I don’t think there’s much benefit from resting more than 10 to 12 minutes.

Of course, your mileage may vary—can you rest for longer than 12 minutes and still feel prepared to lift? If it works for you (and if you can afford the time), by all means, go ahead.

By the way, rest between sets doesn’t apply to warm-ups. If you’re spending too much time here, check out how to warm up properly.

When in doubt, just take those extra minutes

Resting between sets isn’t a complicated thing, but there’s no fixed formula. The same lifter might rest differently depending on the day and circumstance. Regardless, you want to find the sweet spot: resting long enough so that you’re fully recovered for the next set, but not so long that you get cold.

And no matter what, don’t rush through your workout. If in doubt, just take an extra minute or two. After all, you’re in this for the long term. Don’t begrudge a few minutes. In the grand scheme of things, steady progress requires that you have enough patience to make future gains.