Cheating Depth And A Lesson From Master Yoda 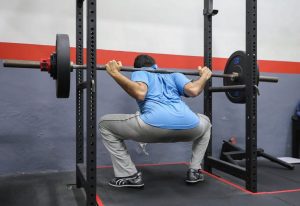 The population census conducted in hell revealed that the most prevalent “squat-sin” amongst the participants was cheating (depth) when they think that they might fail the next rep. The majority, at 54%, squatted high on their last repetition, 32% started cheating on their second last, while 14% were just cowards to begin with.

In a meet, you have 3 judges that confirm the validity of your squat. If 2 out of 3 judges deemed that your squat is high, your glorious attempt in standing up would be invalid.

Basically, the following standard on squat depth must be satisfied.

For lifters adhering to the Starting Strength methodology of performing the barbell lifts:

Starting Strength believes in the holy trinity of the exercise selection criteria:

1. Use the most muscle mass

2. Use the LONGEST EFFECTIVE RANGE OF MOTION

I don’t want to dwell much on interpreting this concept, as Master Rippetoe has elaborated all this in his previous letters. Please refer to Deep Squats and Can You Squat Too Deep?

For the casual squatters:

If you squatted 100kg to proper depth last week and half-squatted 102.5kg this week, have you gotten stronger? You can’t be sure, therefore consistency in technique matters.

N.B. Let’s not argue for the consistency of your half-squat depth. You can never be sure if your half squat is not a quarter-squat, or a third-squat, or a three-quarter squat.

Step 2: Appealing to your logic

Don’t you hate spending your effort for nothing?

Running as fast as you can to catch the bus, only to have the door close in front of you and the bus driving off without you.

Spending the whole day preparing dinner only to know that your guest can’t come at the very last minute.

Studying hard through the night only to know that the exam was cancelled at the last minute (arguably a very unlikely scenario).

All the scenarios above suck, but it has an unknowable component where you can’t control. If your effort goes to waste, it’s not totally your fault.

It’s different in a squat. You have 100% control over it.

Why work so hard for that one extra rep, feeling like you’re about to get squashed like a fly, and when you finally stand back up, you know that it doesn’t even count? Commit to keeping consistent depth, consistent technique.

You shouldn’t be afraid of not being able to stand up. Your rack has safety pins for that.

You should be more afraid of not squatting to depth. It’s torture without reward.

When young Luke Skywalker learned the way of a Jedi from Master Yoda, he saw his X-Wing sinking into the swamp. Panicking that he could never leave planet Dagobah, Master Yoda asked him to use the Force to pull it out of the water.

After a lot of hesitation, he said to Master Yoda, “Alright, I will give it a try.” Seeing his lack of will, Master Yoda scolded, “No! Try not. DO. OR DO NOT. THERE IS NO TRY”

Many of us have committed the same sin of “trying” to get something without much commitment. “Trying” to go a little bit deeper without actually trying.

In the event that you’re in this tight situation next time, remember Master Yoda and DO it, and may the Force be with you.

An extra inch you cut would not make it easier for you to stand up by much. But, if you feel almost equal torture, you might as well make it count. Don’t be afraid of not being able to stand up, be afraid of wasted efforts.

Disclaimer: you can still fail your squat after reaching the depth, but at least you failed it with honour. Learn how to stay calm and keep grinding.